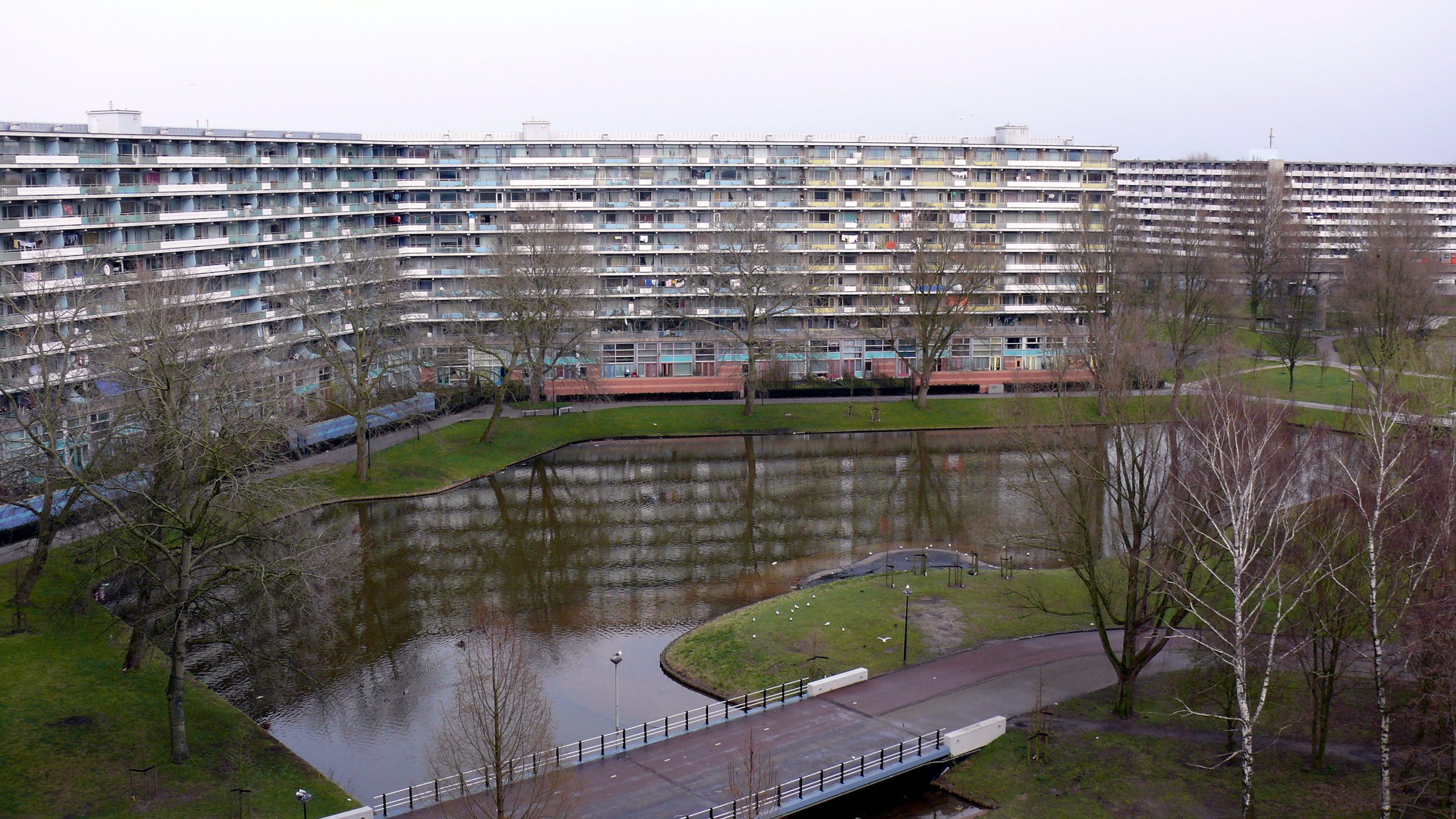 The Bijlmermeer, or The Bijlmer as it’s usually referred to, is a high rise residential area to the South East of Amsterdam. It was to be the suburban pearl of the city. Its apartments were extremely spacious, with lots of windows, lots of light, set in park-like surroundings. Everyone’s dream house. But it was not to be; the housing was, of course, expensive, meant for the middle classes, except they didn’t come. For one thing, while Amsterdam builds the Bijlmermeer, other towns nearby were building detached and semi-detached housing for about the same price. Transport was also difficult; they built the houses first and thought about the roads later. The metro lines that were to serve the area never seemed to come. When they did finally arrive, they immediately became a target for pickpockets, robbers and drug addicts. Soon nobody dared to ride these subways anymore. Our compassionate social counsel decided that if they couldn’t get the middle-class whites to live there, they might as well let out these spacious apartments to the poor (black) populace. Now, these hoodies no longer worked the subways to the South-East; they lived there too. The place became a ghetto; crime was and to some extent still is rife. There was little work available nearby, nothing to keep the boys busy once they dropped out or finished school, gangs formed and terrorized the neighbourhoods at night. Drug abuse increased dramatically. The first stone was laid in 1966, the first apartment was ready in 1968, but it would take another 10 years before the metros would be operational. You might think that lessons were learned from the building of these housing estates, but guess what? The city just recently finished building another similar neighbourhood called Ijburg. Here we see the same thing happening, empty apartments failing businesses through lack of customers, aka residents.

These days, in 2011, there are that many nationalities and illegal refugees living in the Bijlmer that the city’s administration has lost all sight of what actually goes on there. Its politicians are corrupt; money that’s supposed to be for the people ends up in its district counsellors’ pockets. Last year, many of its churches got into the news because they preached healing; they claimed God could heal aids and deliver you from homosexuality. The gays were furious; they demanded that the city fathers forbid them to preach such things; how dare God to heal them. They wanted to take these churches to court. Fortunately, we have freedom of religion in this country. Then there was a string of shootings; it seemed like every other weekend, some other kid got shot there, that has subsided somewhat recently. As for the housing situation, many of those 10 story apartment buildings have been torn down to make place for low rise houses; the government tries to sell houses these days instead of letting them out. The downside of that is that not everyone can afford to buy a house. Many of the citizens of the Bijlmer are unemployed or on minimum wage, and therefore not eligible to obtain a mortgage.

Public transport to and from the Bijlmermeer is excellent, the fact that it wasn’t always so we already mentioned earlier on. Two subway lines connect the area to the city centre; the district also has four railways stations that connect it to the rest of the country. Buses will take you to places that rail and subway cannot. There is also plenty of access point to the motorways that run along the area’s borders, The A1, A2, A10 and A9.

This multi-functional stadium opened its doors on 14 August 1996. It’s FC Ajax Amsterdam’s home ground, although it doesn’t actually own the place. It’s also a popular concert venue, with 50.000 seats, the largest one in Amsterdam. The Dutch national football (soccer) team plays many of its home matches there. The Arena itself is a hideous building, it’s also quite visible on one side, here you are enjoying the countryside along the river Amstel, a flat landscape, fields with grazing cows and sheep as far as you can see, and boom there it is, in the middle of these rustic, peaceful, countryside surroundings, stands this ugly steel construction, visible to the naked eye for miles on end.

There’s an excellent shopping mall near the Arena, and then there’s the Arena boulevard itself with shops, movie theatre’s disco’s, pubs and restaurants. If you’re looking for decently priced electronics, computers, accessories, washing machines, etc., in short, anything that runs on electricity, take the time to visit Mediamarkt.

And yet, the social side of the shopping centre and the Arena is quite different compared to the rest of the city. At night few people go there; it’s only when there’s a concert held on or if Ajax or the National team play a home match in the stadium that the place comes alive. But when those events are over, most people get on the subway and quickly head back into the city.

Some of you may remember what happened in the Bijlmer on the fourth of October 1992. It looked like a trial run for what happened in New York on what everybody refers to today as 9/11. On October the fourth, 1992, a freight plane from the Israeli airline El Al, a Boeing 747, penetrated a high rise apartment building.

Forty people died, including the crew and an employee of the airline flying home to be married. It was concluded that the heat of the crash must have been so intense that even peoples bones totally incinerated.

The forty people who died were the forty who were registered; many survivors say that the actual casualty number is much higher. The Ghanese community declared they lost quite a few more members living there unregistered, some of whom may have been illegal immigrants. Survivors of the crash living in the building say the total number of casualties stands at about 240.

The plane belonged to the Israeli airline El Al. Of course, there had to be an investigation; one thing immediately discovered was that El Al had its own hangar on Schiphol airport. In it, it could store or transport pretty much anything it wanted.

The plane’s cargo supposedly consisted of hazardous materials that would explain the high temperatures that accompanied the crash. They would also be the source of the various illnesses people involved experienced later on. It is still unknown by the ordinary man what those hazardous materials were; neither El Al nor the Dutch national and local governments will come up with an answer.

The best part of the story is that customs never checked the cargo. The material was legally brought into the country; the very same customs department had granted an import license. Israelis are, of course, our good allies, at war with everyone in the Middle East, so we were apparently to go easy on them.

The Crash of the Boeing 747

when a lock pin broke off and the engine broke off, the flying debris caused a second engine to fail and break off; onlookers saw both engines fall into the lake that’s known as “Het Gooimeer.” Some said that the angle the engine hangs on, as early as when still on the ground at the airport, seemed off and that the plane was leaking oil. Actually, there are pictures to verify that.
Dutch minister Jorritsma, the minister responsible for aviation at the time, said that it was quite normal for an engine to hang under an odd angle. Aviation experts, however, begged to differ and said something like, “that’s total crap. Air traffic control misunderstood what had happened to the engines when the El Al plane radioed in; they thought the engines had stalled and failed to understand that they had also broken off and that the plane was damaged. It caused them to make a fatal error with the disastrous consequences we’re all familiar with.

And that’s not all; air traffic control made another booboo. When engines fall of aeroplanes, they should light up on the radar; nobody noticed them. Our fair minister Jorritsma said when confronted with this titbit that only objects transmit a signal being picked up by radar, again something that’s not quite true. That would mean that when enemy aircraft enter your airspace, all they have to do to remain undetected is to switch off the signal. Again aviation experts came to our aid, saying that large objects like the engines of a Boeing 747 flying through mid=air are detected by radar and that someone was not paying attention at that fatal moment.

A day after the disaster, several men in white hazard suits were seen investigating where the crash had taken place. To this day, nobody knows who they were and who authorized their examination. While the area was closed to the public and everyone who wanted to visit the location had to have some form of permission, they could enter and investigate. At the same time, nobody knew who had given them their authorization. The Bijlmer disaster is also said that these men took several items with them.

While some of these stories may have been dreamed up by investigating journalists, it is a known fact that only two members of the Amsterdam health inspection, the GG&GD, were present while bystanders counted over twenty of them.

The crash causes are somewhat complex, but it all started with a lock pin that was supposed to keep an engine firmly locked in place. The pin had broken in two or something like that. What’s wrong with that supposition is that the engine would not have hung at an odd angle if it was simply a matter of a lock pin breaking up. What could have happened is that whatever the problem was, was not dealt with. So everyone went looking for the pin; it’s a condition that should help clear things up.

The pin’s stuff is made of such a hardness that it won’t bend; it would break in pieces instead. Even if it had a tiny crack in it, it would still do the job.

So it became essential to find the lock pin. Every piece of the plane had been transferred to a hangar, and the hunt was on. Well, guess what, in the end, a broken pin was found.

The aircraft had two black boxes, but only one was recovered, and it was damaged.

A black box is supposed to provide information, particularly in case of an accident of what actually went on, on the plane during the crucial moments. As I said, the surviving box was damaged, and it was precisely the part on which these crucial moments were recorded that was impaired. So, the box was sent to Washington for further repair and investigation.
The plane had just landed at Schiphol airport; it had come from New York carrying a load of chemical materials in its cargo bay. It remains unclear whether these were unloaded at Schiphol or not, now, if they were still on board at the moment of the crash.

Not a whole lot has been unravelled about the Bijlmermeer crash; much remains uncertain, undisclosed. That leaves plenty of room to speculate, and it keeps tongues wagging and emotions running riot among the Ghanese and Suriname communities in the Bijlmermeer.

The prison opened up in 1978; it consists out of six square high-rise blocks, all interconnected. The prison did not need bars, so its designers thought. The windows were made of unbreakable glass. The terrain around the prison was of such design that anyone escaping would be immediately noticed. Then there was the height; the height of the jail cells was another unovercomeable obstacle. So they thought. Well, guess what, one day, someone broke the unbreakable glass. So up came the bars, and in the meantime, plenty of people have escaped from the institution.

The Bijlmermeer is window number 46 on the Canon of Amsterdam.