Being Dutch reformed was the right thing to be in 17th century Amsterdam. Faith played an important role in society, and the Dutch reformed church was the leading religion in the Republic. Yes, you read right; we were a republic in those days. We were still at war with Catholic Spain, and the city had thrown out the Catholics and embraced Protestantism in the “alteration of Amsterdam.” Alteration meaning the altering of our religious orientation. Now, catholic out, protestant in. To make this clear and prove the point, churches had to be built—Protestant churches and, above all, Dutch reformed protestant churches. So hence the Westerkerk or Western church as it would be called when translated into English.

Church and State
Administrating the city of Amsterdam really consisted of only two things. Making sure trade went well, that our merchants made money, and keeping the religious movements out of each others hair. While the city had grown protestant, rich and large at the end of the sixteenth century, it was now time to realign the delicate religious relationships. At least that’s what leading city fathers of those days decided for us. 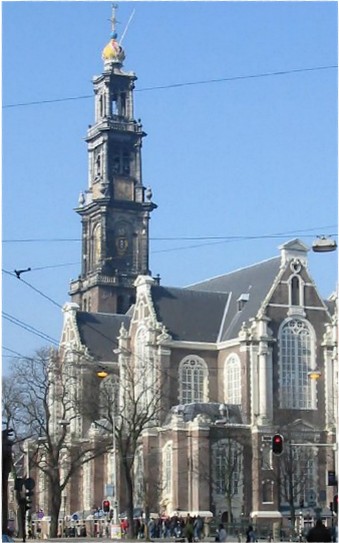 The reformed protestants had, after the alteration, taken over all the catholic churches. However, the true meaning of Protestantism had to be expounded on a higher level and what greater way to do this than to build a series of new churches. As the city was ever-expanding, there was plenty of space to do that in. So building they did, the Zuider Kerk, de noorderkerk, de oosterkerk and the westerkerk arose to give the city its own authentic protestant churches. Simplicity was popular, and we see that back in the names the churches were blessed with. To wit, South, East, North and West.

The Wester church 1631
The Westerkerk in Amsterdam is located halfway to the Prinsengracht, at a stone’s throw from the Anne Frank house. The church is not located in the Jordaan district as is popularly assumed but stands just outside it on the other side of the canal. It was the largest protestant church build and was, in fact, for quite some time, the largest protestant church in the world. Its tower (87 meters High) is the highest church tower in Amsterdam. Queen Beatrice and her consort Prince Claus von Amsberg were married there, Rembrandt lies buried there, but nobody knows where his son and one of his housekeepers, aka lovers Hendrickje Stoffels, also lies buried in a grave there somewhere. Getting there are easy take tram numbers 6, 13, 14, or 17 from central station and get off at the Westermarkt; it’s the 3rd or 4th stop. The church is right there, impossible to miss.

(LINK) The church and its tower play an important role in the culture of the original inhabitants of this city. An artist named Willy Alberti popularized the place in a song that is known to every authentic Dutchman. It’s a part of the culture of the Jordaan district; it was a neighbourhood of simple hard-working people, with a great sense of humour and a love of music that reminds us of the Irish.

At the feet of the old Wester
I’ve spent many a moment in thought
I’ve often stood there dreaming
Of that wonderful, glorious Jordaan

The best rendition of this song that’s seen more Dutch crooners perform it than probably any other was done by Willy Alberti and Johnny Jordaan. 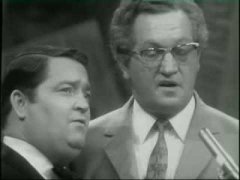 The Westerkerk was build in the renaissance architectural style and holds the shape of a patriarchal cross. The building is 48 meters long, 28 meters wide and 27,5 meters high. It has 36 large windows, and the interior is done in grey white ornated stucco.

The balcony (only accessible during the summer months) provides us with a rather good view of the Jordaan district. A stone tablet in the memorial of Willy Alberti has been placed on the wall of the tower.

The Wester tower on AMSTERDAM TOURISM