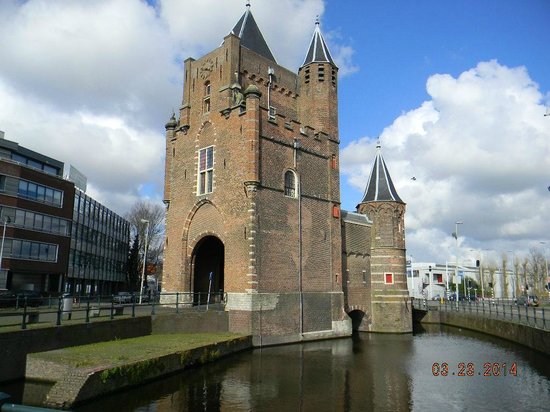 If you’re afraid you hide, preferably behind something, a wall is a great place to hide behind; underground is even better, but it’s easier to build something above ground than dig underground. During the middle ages, when people became afraid of their distant or not so distant neighbours, they build walls around their cities. Artillery put an end to that; when cannon became more and more powerful, there was little use for walls anymore. Walls, of course, did not only keep armies out, thieves and criminals as well.

In the olden days and to some degree still, nowadays, the enemy would come overland and if you were unfortunate enough to live on the coast also from the sea. Currently, it comes from the air first. Hitler, the guy who invented bombing cities, was vilified at the beginning of world war II for bombing civilian targets, but it wasn’t long before the Americans perfected it. But back in the middle ages, The best defence in those days was a wall. Everyone agreed to that then. You could let those in you wanted inside and keep those out you didn’t. Amsterdam was a trading town and didn’t think it had many enemies,

so they put off building their wall for quite some time.

The first stone was laid in 1482, and twelve years later, the wall was completed. The city was now defensible and had 5 entry points, to wit:

The wall was two meters thick and over 5 meters high. It was never put to the test; Amsterdam muddled through history without ever being besieged. The enemies from the South (Spaniards) never came, and neither did the dreaded pirates.

There was, however, an important additional function the wall provided
it’s the circumference. It set boundaries, legal boundaries, it determined where the city started end ended and, more importantly, where the laws of Amsterdam started and where they ceased to have any jurisdiction. In short, Amsterdam had its own civil government that could make its own civil laws and impose them on those inside its walls. The city wall run along het Singel, the Kloveniersburgwal and the Geldersekade. The wall-,like most other walls of most other 21 century cities, is no longer there; it got in the way of city expansion and had to go. But two of the gates survived, they are:

The building the people of Amsterdam know today as the Waag on the Nieuwmarkt was, in fact, one of the three main gates the city had; it was called Saint Anthony gate, built-in 1488, only a part is leftover from the original structure. The other two were the Regulars gate and the Haarlemmer gate.
The Saint Anthony gate on the east side of the city was flanked to the north at the harbour’s edge by the Schreierstoren. It held guard over the waters of what is now called het IJ. It was not a gate. It was a defensive tower that still stands today. It, like the Waag (Saint Anthony’s Gate), is now a restaurant. The lower part of the Munt tower is another small section of the city wall intact.

In 1618 the Saint Antonis gate became a weighing-house, a place where goods were weighed. Traders coming into Amsterdam would have to bring their goods there and have them weighed to sell their wares. The city also imposed minimum standards on the wares, and they wanted to be known in the trading business as an honest and fair city.

Amsterdam had towers build in its city walls to see the enemy coming so the enemy could be seen coming from a long way of. The only one that’s still left standing is the Schreierstoren mentioned briefly above.

Schreier’s tower
This tower, with the other three main gates, guaranteed fair trade in Amsterdam. Taxes were levied on goods entering the city. Amsterdam was a far more important harbour than Rotterdam, and ships brought their wares in from all over the world. The city blossomed, and with the discovery and consequent subjugation of colonies, it became exceedingly rich.

The Schreier’s tower is also where seamen said goodbye to their wives, children and sweethearts. That’s where it gets it to name from Schreier means Weeper.

Montelbaans tower
There’s one more tower to mention, the Montelbaans tower. It’s an old tower, built-in 1516, but it was not a part of the old city wall. It had another function, and it was to defend an area outside the wall called Last. Last was an industrial area of great importance to Amsterdam. Eventually, the wall was extended and came to include this area. The Montelbaans tower became its main lookout.

It’s been difficult for businesses to find a new destination for this old monument. While others do great as restaurants, this one doesn’t. At the moment, it houses a heavily subsidized cultural centre.

The city walls are number 5 in the Canon of Amsterdam.