Once the North Sea canal was established, the other side of Amsterdam (The North) became the city’s new shipbuilding centre. All of a sudden, that part of Amsterdam started to matter. The best-known ship builds on its yards was undoubtedly the Oranje, the fastest passenger ship of its day. 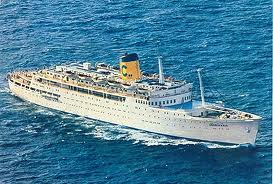 Behind Central Station, at the other side of Het Ij, lies Amsterdam Noord (the northern section of town). Clearly visible to everyone until the construction of the already mentioned station was completed. The sector became pretty much obsolete after that until they started to build ships there. Suddenly, the district became an important source of employment; its shipyard, the NSM, became a significant aspect of the city’s economy. The company reached its apex with the launching of the passenger ship, the Oranje. The NSM was the largest shipyard in the country.

The order to build the Oranje came from the “Stoomvaart Maatschappij Nederland” (The Netherland Line). It was intended to maintain the shipping line to East India (now Indonesia), once The Netherlands most important colony. The ship would carry about 8000 passengers to and from the dependency. The ship was not only good to the eye, but it was also, in those days, the fastest passenger ship ever built. Thousands of people attended the launch ceremony conducted by Queen Wilhelmina. Only nothing happened; the ship wouldn’t go down the slope. It took some hydraulic device to get her moving.

Initially, the area across het Ij was primarily known as the gallows field in the area, then called Volewijck. Now known as a sports centre and football club. But after the North Sea canal opened up in 1876, the area came rapidly into view. In 1877 the Amsterdam Droogdok Maatschappij (ADM) (Amsterdam Dry dock company) established itself on its shore near the Meeuwenlaan. The iron dock was specially built to construct large steam vessels that could now access the city through the North Sea canal.

In the 1920 ties, the NSM hopped on the wagon; it found itself a place near the Cornelis Douwesweg close to the wharves of the Nederlandsche Dok Maatschappij (NDM). After WW2 the companies merged to form the Nederlandse Dok en Scheepsbouw Maatschappij (NDSM), (Dutch dock and ship building company.) There was nothing else to see for a mile and a half but dockyards, cranes, and engine houses.

The large amount of employment that these yards provided gave The Northern district equality with the other districts it had never enjoyed. All these labourers needed housing, Vogeldorp (bird village) was build, de of der Pek (pitch) neighbourhood, the Bloemen (flowers) neighbourhood arose, and a few more as well. In the 1920 ties, a new wave of house building followed. The only problem that remained was getting to and from the other side of Amsterdam. Ferries were all there was for a long, long time. A bridge behind the central station was out of the question; it would be too much of a hindrance to shipping; besides het Damrak and Rokin would not deal with the traffic the bridge would generate. With great difficulty, it was finally decided to build a bridge in the Eastern section of town (1957.) later on, in 1966, and in 1968, the Coen and Ij tunnels were constructed.

But dark clouds gathered over Dutch shipbuilding, the Asian industrial economies were on the rise, and it became increasingly difficult to compete; the oil crisis in the 1970 ties also weighed heavily on the industry. In 1974 the last mammoth tanker left the Amsterdam dockyard. Despite numerous protests, the NDSM had to close its books in 1978. Another yard followed suit in 1984, and the last one of the big guy’s te ADM, in 1985. In a period of just a few years, thousands of dockworkers and labourers lost their jobs.

It was shipbuilding that had made the northern sector what it was after its collapse; bleak times arrived but gradually, as first artists found space to work in the old shipyards, and when they, later on, turned them into entertainment centres, the area became alive again. The trendy concerts held there attracts the young and restless, the theatre productions the cultural and the well to do and then businesses started to open up, thinking, hey, maybe it’s not such a bad idea to move the company to the North where there’s plenty of space, and the rent and utilities are cheaper. The communications industry and entertainment are two business sectors in particular that have discovered Amsterdam Noord. It lives once more.

The rise and fall of the North Amsterdam shipyards is window number 40 on the Canon of Amsterdam.