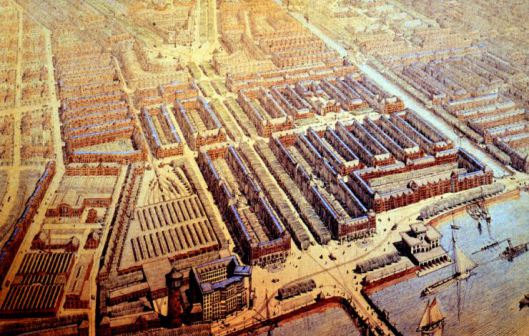 Plan South made a clean break with all traditional forms of housing construction. An architect by the name of H.P. Berlage designed an urban extension plan that would include many green. It would contain sleek, modern-looking building blocks of affordable social housing. The facades of the houses would be adorned with designs of art, especially for this purpose manufactured brick. The architects of Amsterdam really went to town on this.

The housing act of 1901 had given the Amsterdam administrators the assignment to expand the city. The order was then duly passed on to architect H.P. Berlage; it became his job to find something constructive to do with an enormous land area between the Amstel river and the Schinkel, a small stream in the neighbourhood Vondelpark. The project was called Plan South. His first attempt was flagged down; it was considered too expensive. The next one, somewhat delayed because 16 million people had to die first in WWI, was excepted in 1917.

Berlage’s plan interchanged small straight up and down streets with wide thoroughfares like the famous avenues they had in Paris. There were to be large patches of green beside the backyards inside the blocks. There were to be large squares as well, and waterways. On one side of the project would the Olympic stadium arise, build by Mr Jan Wills; on the other side, it was a building called the skyscraper that would catch the eye build by master J.F. Staal. Right behind it, the Berlagebrug was to cross the Amstel river, and it did so in 1932.

Although Berlage builds quite a few important buildings in Amsterdam, as the new Bourse building on Damrak (1903), he could not do so in the new area we’re discussing here. These jobs were given to the new architects of the Amsterdam school. While Berlage had done away for good with the old styles of Cuyper and his contemporaries, it was now his turn to be considered old fashioned by the new school of Amsterdam’s architects. They considered his work to be too business-and too sober.

These new guys turned the facades of their houses into sculpture by way of creative masonry, alternating styles and sizes of windows and ironworks. They also favoured the use of deep colours and rich ornaments. Their apartment buildings soon got themselves the nickname of “labourers palaces.”

The Amsterdam school’s most famous architects were Michel de Klerk, Piet Kramer and Jo of der Mey. The first two developed the houses on the P.L. Takstraat. The Klerks best-known work, however, is not in the South. It’s in the West; it’s called “the Ship” in a neighbourhood known as the Spaarndammerbuurt. Jo of der Mey designed the Scheepvaarthuis on the Prins Hendrikkade, its a hotel these days.

De Klerk died in 1923, and its immediate effect was that the building style became less exuberant. It wasn’t just his death that caused this. It was also the national government that started to economize on social housing. The architects were now on to stick to facades only and leave the rest of the buildings up to contractors who build cheap apartments behind the fancy brick facades.

The Amsterdam administrators loved the work of these new boys. It rapidly became the city’s new building style and remained so for decennia. Bridges, gas and electricity buildings, street furniture, lampposts were all to be built with the same care, in this new style. Amsterdam extensive social housing policy and architectural expertise soon led to worldwide interest and fame.

Plan South is window number 34 on the Canon of Amsterdam.