“Het leverage” (the darling, the dear) on the Spui in Amsterdam is a statue made by the Amsterdam sculpture Carel Kneulman. It rather accurately depicts an Amsterdam insolent rascal with a big heart. 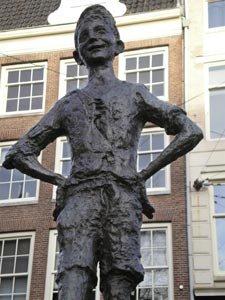 The statue was unveiled on the 10th of September 1960; however, previous to that date, a copy made out of plaster had stood in its place until it was stolen. A large contribution by a cigarette manufacturer enabled a more sturdy and unmovable brass version to be erected.

PROVO or not to PROVO!
During the restless and rebellious 1960, the sculpture increasingly became the centre of protest. “Happenings” is what these gatherings were called then. And since the statue had been paid for by the tobacco industry, it became a symbol of the anti-smoking movement led by Robert Jasper Grootveld who adopted it as their favourite place to protest.

The Provo’s suddenly appeared without warning; they were probably inspired by movies made by the eternal rebel James Dean. Just as they had suddenly appeared, they disappeared. After them, a local political party was founded in 1965 by 3 infamous politicians called Roel of Duijn, Luud Schimmelpennink and Grootveld.
Their greatest achievement may have been the publication of a magazine called Provo, and it was distributed to and read by every youngster with a yearning for change. Their most dastardly deed was throwing smoke bombs at the newlywed royal couple and heir to Princess Beatrix and Prince Claus, as far as anarchy was concerned. The spirit of the movement was to criticise society and to come up with controversial solutions.

Free love, nature, the environment, emancipation, renewal and democratization were the topics they ran with. The always rather unorthodox solutions they brought to the fore kept them from having any success. After two years, the party died out and was symbolically buried in Vondel Park. 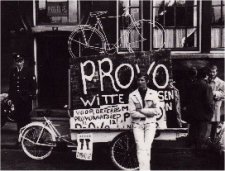 The infamous Amsterdam squatter movement had its roots in the anarchist views and concepts of the Provo’s. They may have lasted only for a moment on the eternal scale of things, but their ideas far outlasted anything they may ever have imagined.

Het Lieverdje was often the place they started their actions and the departure point of demonstrations held at various places in the city. There was nothing special about the statue itself; it was what it stood for. The people of Amsterdam don’t have much affinity with sculpture and this one today no longer has any immanence in the heart of its populace. However, the sixties, seventies and early eighties were different days; the magic word during those decennia was, hold on to your seats, “anti.” It didn’t matter what it was; if you wanted to be in with the “in crowd”, you had to be anti. As a son of that age of Aquarius, I continue to be amazed at what people put up with these days. If politicians in those days had tried out some of the things they run with today, the city would have been too small. There would have been riots left, right and centre.

Anyway, back to the statue, it is a minor sculpture on a rather insignificant square. Yet, it deserves its place in the canon as it was “there” where the hard-working decency of the fifties was first challenged in this city of Amsterdam, known for its liberal views and ideology.

Het Lieverdje is window number 45 on the Canon of Amsterdam. 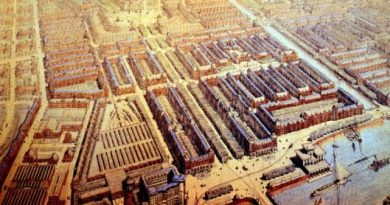