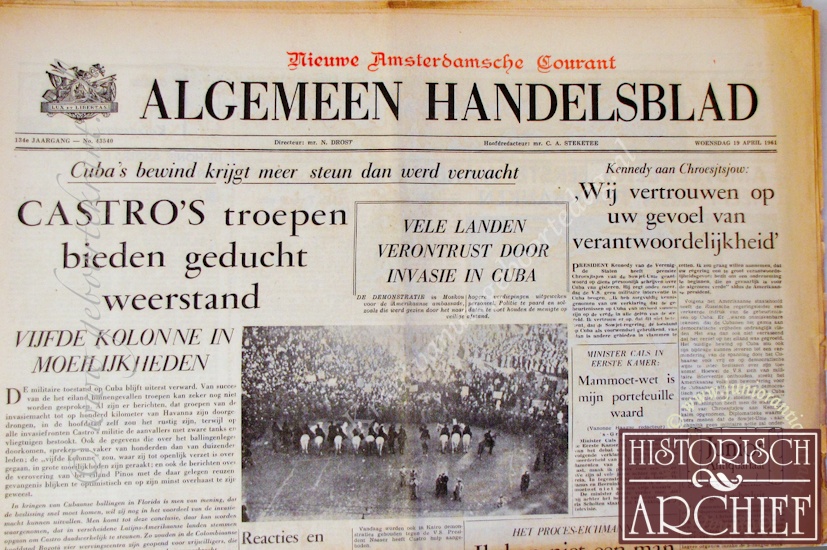 The general or common trading paper would be a fair translation of what we Dutchmen know as Het Algemeen Handelsblad. The paper no longer exists but is important in history as it was instrumental in shaping what Dutch newspapers have become. Somewhat trivial a subject, perhaps, but it’s not the only one on the canon of Amsterdam. The paper was founded in 1828 by a stockbroker, and its purpose was to inform those who worked in the sectors of trade, shareholding and banking. Algemeen HandelsbladWhile it was a daily, it was not intended to provide any news besides that which pertained to the financial and trading sectors. Politics were added as a subject at a later date.

Publicizing politically tainted publications that were not brought by any other newspapers got the head editors in trouble. They were accused of having their feet in trade and their heads in politics. When they published an article about the uprising in the Southern provinces and mentioned rebels who used force to separate themselves From The Netherlands to create Belgium, shares dropped dramatically.

In 1903 the newspaper saw fit to move into this rather distinctive building on the Nieuwezijds Voorburgwal. See picture

Quite a few newspapers have their roots in Amsterdam and not in The Haque, and it is the political capital of this country. There’s a reason why politics wasn’t news in the 19th century, trade was, and trading took place in Amsterdam. That’s where the Dutch bourse was, that’s where the biggest port was, that was the place ships set sail to and departed from.

When more and more newspaper showed up on the scene, the business came under pressure; after all, there were only so many readers at the end of the 19th century. Cooperation was sought on the administrative, technical and editorial fronts. The Nieuwe Rotterdamse Courant (NRC) held to the same style as the Amsterdam Handelsblad; approaches were made, both in 1914 and once more in 1922. The parties disagreed.

After the war, the pressure had come to a point where differences had to be set aside, income from advertisement had dropped to dramatic levels, and the number of subscribers had been declining for years. In the notable year of 1970, it was decided to combine both papers and create one liberally orientated newspaper.

The Nederlandse Dagbladunie (the Dutch union of daily’s) already published both papers; they also shared several correspondents. As their editorial opinions did not differ, (actually there was already only one editorial office that served both papers), there was no longer any reason not to fuse into one large daily liberal newspaper.

Mentioning this subject in the Canon of Amsterdam has its upside; the creation of the newspaper NRC Handelsblad led to the emergence of a quality newspaper with an editorial and opinion page and a cultural appendix. The language changed as well; it became less elite, articles were now written in a language that everyone could relate to. The newspaper no longer just catered to the financial and political worlds.
Other newspapers jumped on the wagon, copied its style, and the wonderful building they occupied became the trend in modern-day newspapering.

The Algemeen Handelsblad is window number 25 in the Canon of Amsterdam.