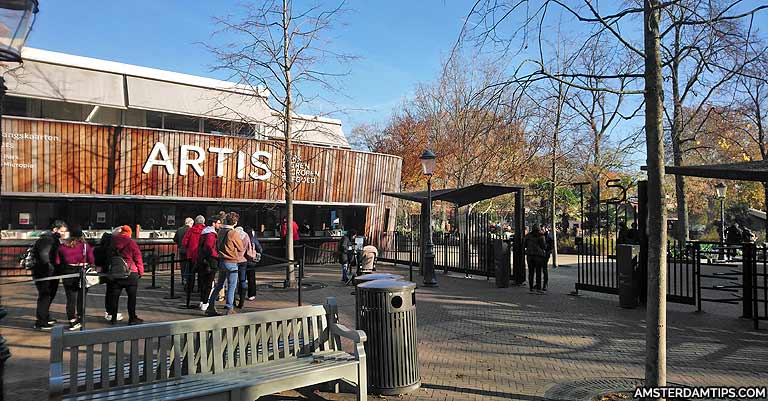 The Amsterdam zoo covers a large area and is surrounded by suburbia on most sides. Its main entrance is on the Plantage Kerklaan. Natura Artis Magistra, the Latin name of the zoo, or in plain English ‘nature is the instructor of the arts’, dates back to 1838. The institution obtained the right to add “Royal” to its name in 1852.

Artis was founded on May first 1838 and given the name of zoological society Natura Artis Magistra on bookseller Westerman, stockbroker Werleman and watchmaker Wijsmuller. They took it upon themselves to provide Amsterdam with a zoological garden.
Their noble purpose was to bring the population of Amsterdam closer to nature.

Artis is a great place to explore; it holds animals, of course, plants, a planetarium and both a geological and zoological museum.

The zoo
It’s the oldest zoo in the Netherlands; it holds over 900 different species a wide range of creatures. On the one hand, you have the giraffe’s of the African sofa; on the other one, the little insects of the insectary. There are sea lions and gibbons and so many other monkeys to see.

The gardens
The zoo also holds quite a few trees; some are monumental and older than the park itself. Besides the trees, there are also a few theme gardens. There’s a Japanese garden, for instance, a Dutch one and a Metzelaarkas.

The planetarium
Movies are shown in the 628 m2 sphere creating the illusion that you’re travelling through the universe yourself. Become your own astronaut at the Artis planetarium. It’s open every day. They are doing some renovating, though, so check before you go.

The geological museum
This museum shows us how life evolved on earth. It mentions old life forms such as dinosaur skeletons, fossils, and minerals.

Het zoological museum
The Zoological Museum of the University of Amsterdam is one of the two largest naturalistic museums in the Netherlands. It yearly holds various exhibitions on different subjects in the zoo’s aquarium.

Info by Artis, check out the WEBSITE OF ARTIS.

Being a zoo is not always easy; there are always new laws and guidelines in the make, complying with them often means the making of alterations, that costs money, the zoo has to keep expanding to attract new visitors, competition between zoos is stiff, with zoo’s competing both nationally and internationally. One Dutch zoo got into financial difficulties this year.
The expansions are hitting the zoo hard.

The most important items on the agenda this year are a further expansion of the zoo and an underground parking garage. Some zoo’s predators have to be moved, and the parking facility is a hefty investment; they’re still quite a few million short, so it’s not totally sure that all objectives will be met.

Artis is window number 26 in the Canon of Amsterdam.