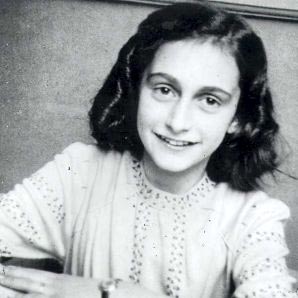 Annelies Marie Frank was born on the 12th of June 1929 in Frankfurt am Main, a city in Germany not too far from the Dutch border. Her father’s name was Otto Frank, and her mother’s Edith, Anne, had an older sister called Margo. The Franks had lived in Frankfurt for generations; Anne’s mother Edith came from Aachen, adjacent to the Dutch border. Both families were of Jewish descent and had lived in Germany for generations. Anne’s first few years were happy and carefree ones, but when Hitler rose to power in 1933, her father decided it was best to flee the country. His brother in law arranged for him to set up a company in Amsterdam.

Anne Frank and her family moved to Amsterdam in 1933. Anne was 4 years old at the time, her sister Margo 7 or 8. They lived behind what is called Victoria Plein (victory square) today. An uptown neighbourhood in the south of the city. The hatred against Jews already tangible in Nazi Germany would soon spread over into The Netherlands. Seven years after Anne Frank arrived in Amsterdam, Germany invaded Holland. In 1942, the Frank family saw themselves forced to leave their comfortable lodgings and take refuge in what later became known as the famous Achterhuis on the Prinsengracht (Prince’s canal) 267.

The door between the front and the back part of the house was hidden behind a bookcase. The people at work in the front part of the house had no idea refugees were living in hiding at the back. During the day, they all had to be as quiet as a mouse.
Anne Frank’s family lost their German nationality after leaving, and Anne never applied for Dutch citizenship. In fact, she died statelessly.

Anne kept a diary from July 1942 until August 44; she wrote about her fears, her love for Peter, who was also hiding there and her quarrels with mostly her mother.
Anne wanted to become a writer; her diary became thicker and heavier as time passed. She dreamed about having her story published one day. Unfortunately, she was never able to finish it.

The refugees were betrayed and arrested. They were transported by way of Camp Westerbork to concentration camp Auschwitz-Birkenau by train and a month later to Bergen Belsen. Sad to say, this was the last train that went there, after that there were no more transports to this extermination camp. It was Also Anne’s last train ride. In October 1944, 1300 women left Auschwitz for bergen-Belsen, Anne was sick, and she died shortly before the camp was liberated.

Anne wrote her diary in letter form; the letters were addressed to Kitty, Anne made up. They were found by Miep Gies and Bep Voskuil, employees who worked in the building they had hidden in Amsterdam and knew of their existence.

Otto Frank (Anne’s father) was the only one in the family who survived the war. He was liberated by the Russians and returned to the Netherlands. Miep Gies handed him Anne’s letters. He rewrote a few pages here and there where Anne mentioned her feelings at length about her mother and had the book published in 1947. It was titled “The diary of Anne Frank.”
The book was published in two different versions, one with the original text by Anne and the redirected version by Otto Frank.

Otto remarried in 1953 with another holocaust survivor from Auschwitz. He moved to Bazel in Switzerland, where he died at the ripe old age of 91 in 1980.
Miep Gies kept Anne’s letters without reading them; she handed them over to Otto Frank. She died at the age of one hundred in 2010 in the town of Hoorn.

No one ever discovered who betrayed the Frank family.