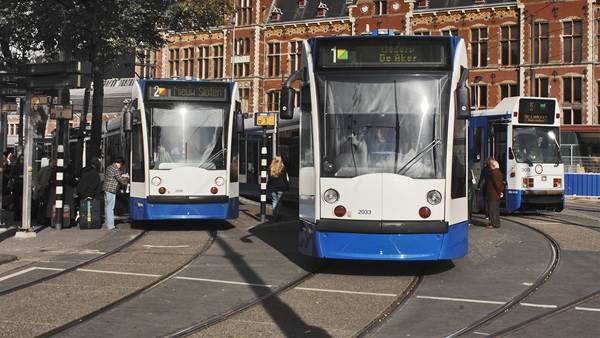 When you’re planning to come to Amsterdam by car, it is recommendable to look at the city’s parking policies. First, parking in Amsterdam is time-consuming and expensive. The local government actively discourages driving and does this mainly by limiting parking space and charging exorbitant fees.

Now don’t panic. There are a few ways to get around this, they’re relatively cheap, but they do require some preparation; having a bit of imagination will help as well.

Cars
There are a few P+R areas on the outskirts of the city where you can park your car for only a few euros; next, you board a bus, tram or metro to take you to where you want to go. However, a public transport system takes some time to figure out, and Amsterdam’s system is no exception. Not being able to speak the language doesn’t help either.
One good thing is that we are no longer subjected to “wheel clamps” the government decided that these are not tourist-friendly. Unfortunately, they found an alternative; now they just tow your car away, of course only if your meter has run out or if you’re parked where you’re not supposed to. There are a few underground car parks in the city, but these tend to be expensive and are often full.

The Train
Coming in by train is by far the most relaxing way to enter the city; Central Station lives up to its name and takes you right smack into the city’s centre. From there on you can further your journey by either taxi, ferry, bus, tram or subway. There’s a travel information centre “GVB” on the square in front of the station where you’ll be able to gather all the information you need to negotiate Amsterdam by public transport.
It’s usually busy. However, there’s a second office below ground at the metro station; you may cut the waiting time in half if you manage to find it.

Public Transport
Everything is accessible by public transport in Amsterdam. Trams, busses, ferries and subways can bring you to every nook and cranny of this city. If your destiny is somewhat further out from the centre, you might consider taking a bus; chances are they will bring you somewhat closer to your destination. Amstelveen or Zuid-Oost (south-east) are best reached by metro; this includes the Arena (Ajax football stadium) and the area formerly known as the Bijlmer.

The tram
This mode of transportation is environmentally friendly; most buses either use alternative fuels or are equipped with exhaust filters. The tram is fun as this form of transportation is not that common in most places anymore. Buses and subways have become the norm.
The seats are above street level, giving you a rather good view of the city you’re traversing. The tram tracks are kept free of other means of transportation except for taxis, enabling you to travel through the city with relative ease.

Line 3
My favourite tram line is line 3. Not only because it passes by my house but because it circles the inner city in much the same way as the old canals do. It passes by many landmarks, such as the concert hall, the rijks, of Gogh, Stedelijk and several other museums. 4 parks and 3 markets pass by as well on its route, it also crosses all the exit ways to the outlying districts of the city.

On foot
Of course, you can also explore the city on foot, especially the inner city. This is also the area to shop in and features the city’s 2 main entertainment squares. You can walk from Central Station to Dam square by way of the Damrak, continue to the Munt (mint) tower where you can either visit the flower market or continue on the Rembrandtplein for a few beers. Leidse Plein is reached by turning right at the traffic lights halfway between Dam square and the Munt. Left of the Damrak is the Red Light District. The Nieuwmarkt (new market) is reached from Central station by way of the Zeedijk, from where you can continue to the flea market (Waterlooplein) and the Zoo (Artis).

Taxis
Taxis aren’t cheap in Amsterdam, not so much because of the entry price but because there’s a lot of cheating going on with drivers asking for a set price for, for instance, a ride to a museum rather than letting the meter determine the cost. Ask them to turn the meter on, and if they don’t, get out. Set pricing is prohibited.

Bicycle taxis
Bicycle taxis do pretty much the same thing, but these too should be paid by the kilometre. One advantage is that these guys are adept at driving their vehicles and can get you everywhere rather fast and at breakneck speeds. Traffic rules do not seem to apply to them; getting into one of them can be quite an experience.

Water taxis
Yes, there is such a thing as a water taxi in Amsterdam, quite handy if you want to do all the tourist spots. Otherwise, it’s pretty much useless as it is not cheap, and you can’t always get off when you want to as stops are far and few in between and the timetables unreliable.

Bicycles
The best way to get around Amsterdam is by bicycle; many “bike for rent” places to hire a bike from. Make sure you lock your bike when you park it, or it will be gone. Every citizen of this city has been through the trauma of having had his bike stolen at one time or another.

Ferries
Accessing the Northern districts of the city can be done by ferry. Behind the central station, several ferry services will take you to various destinations (often for free) on the other side of the water known as “Het IJ”, pronounced as I

In short, when you plan to visit Amsterdam getting around by either public transport or bicycle is by far the smartest way to go. Btw, don’t even think of driving a car around the city centre, it’s madness, you’ll get hopelessly lost. For one thing, every street is “one way” only; either right or left turning at the end of the street is usually prohibited, parking spots are impossible to find, and half the streets are usually broken open. Furthermore, streets and canals are always blocked by lorries unloading, garbage trucks picking up trash and taxis either taking someone in or letting them out.