The General Urban Expansion (AUP) was an urban development plan for expanding the city of Amsterdam. It was dreamed up in 1934, excepted by the Amsterdam town council in 1935 and approved by the crown in 1939. It was mostly implemented after a short interlude called WW2. The plan proved to be the basis of the city’s expansion to the West and the South; it was meant to provide planning up to the year 2000. Its fulfilment became a rather ambitious undertaking. Amsterdam wasn’t the only city in the Netherlands that nourished such plans. Eindhoven did as well (1930), and so did Rotterdam (1928). Actually, if you look at the dates, you’ll notice that they were ahead of us.

At the end of the 19th century, the population of Amsterdam had grown to such an extent that housing was becoming a problem. After the first expansion in 1896, the city had acuminated quite a bit of land through the annexation of several villages. Places like Sloten, Watergraafsmeer and a part of Nieuwer Amstel, including their lands, had now become a part of the municipality of Amsterdam. These annexations came through in 1921. These lands were chosen to build the new housing and business facilities the city needed. And then there was, of course, that forgotten and despised part of the city, the North. The North lies across her Ij, the big harbour of Amsterdam. These towns were Nieuwendam, Ransdorp and a part of Oostzaan. All of a sudden, the city increased in size by 400%. In 1928, Amsterdam’s government department of public works started up a subsection called urban development. These were the guys that were to make sure the plan got properly implicated. It was headed by a troika of three men, L.S.P. Scheffer (department head), Theo K. of Lohuizen (urban development researcher) and Cornelis of Eesteren (urban development designer).

The developers divided the plan into four sections to get their own development; they were housing, commerce, recreation and transport. This concept was first formulated in 1910 by a man called Werner Hegemann. Commerce or, in plain English, “work” was mostly to take place in the existing inner city and in the to be constructed Western Harbour area. The housing and living was to be done in the rest of the Western area but primarily in the South. Recreation was supposed to be done in areas between the working and living regions, parks and green lawns, etc. Mr Eesteren used in his implication of this concept the method of Martin Wagner from 1915.

Several prognoses were made about the development of the population, the housing it would need, the utilities it would require and industry.

A structure of wedges was developed, like extending fingers of housing and industry with areas of green in between them. The biggest wedge would become “het Amsterdamse Bos” (the Amsterdam forest).

The original plan was mostly structural; it roughly indicated were what was to be built, but nothing concrete was established as to what the housing would actually be like or what forms of industry and commerce were to be developed and precisely where. All this was to happen later during the specific planning of specific areas. However, it soon became apparent what the designers had in mind, light, air and space, that was to be the new concept of the building. Of course, that had a great deal to do with the cramped housing facilities the people of the inner city had to deal with and had done so for centuries. In contrast to previous forms of housing development where all was to live together as close as possible and on as little as land as possible, now it was space that would be provided, together with water and green. The actual housing was, though spacious in comparison, but also sober and reserved. The blocks were placed to receive the maximum benefit of the sun.

So that was the plan; after the war, the first area they laid their hands on was the West. Housing development there took the form of garden neighbourhoods. Long buildings of apartments arose with large green fields in between supplemented by shrubbery and outdoor sports facilities on which the young and old could exercise. Slotermeer saw the light of day, build between 1951 and 1954. Geuzenveld was next, (1953-1958), Slotervaart (1954-1960), Overtoomse Veld (1958-1963) and Osdorp (1956-1962). In Slotermeer, architects choose a rather peculiar style; the housing builds there was supposed to remind you of being in a courtyard, very country style like. At Geuzenveld, they tried to create the impression of being in a large town by building semi-high constructions at the centre surrounded by low rise housing. The Sloterplas (a lake) was to be in the middle of all these so-called garden neighbourhoods.

Structure development plan North created in (1958) made it possible to build new neighbourhoods in the Northern sector of town. The department of urban development, however, was not interested. There were no bridges or tunnels across the harbour; everything had to go by ferry. That was to be changed when the Coentunnel was built in 1966 and the Ijtunnel in 1968. The planners looked again and called Nieuwendam-Noord (1964-1968), Buikslotermeer-Noord (1964-1970) and the Banne Buiksloot (1964-1968) into existence.

The next modification to the original plan was the construction of the Bijlmermeer (1965). Structural plan Amsterdam South and South-East it was to be called. Land from the town of Weesperkarspel was annexed to make this development possible. At a fair distance from the city centre, the district was to be serviced by two metro lines.

It wasn’t until the 1970 ties that urban development really took off. It soon became clear that not everybody embraced the concepts of space, light and air. The idea of the compact neighbourhood was formed; areas that were already build-up could have the spaces in between also utilized for housing. Another development was the desire to live, work and recreate all in the same area. Low rise, village-like neighbourhoods also became popular.

From 1990 on, more and more people called out to have the garden hoods of the West torn down and restructured. It is said that that way many more houses could be built, housing many more people. A plan was developed in 2001 called “Direction Park town 1015. One of its intentions is to tear down 13.500 houses and apartments and build 24.000 new ones to replace them.

The General Urban Expansion is window number 38 on the Canon of Amsterdam. 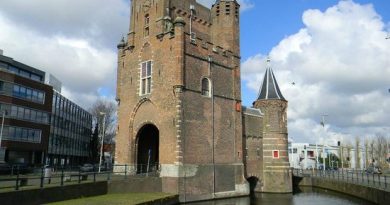 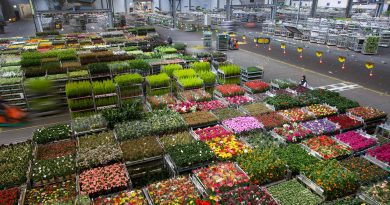 The Flower Auction of Aalsmeer (FloraHolland)