Dam Square is the best-known square of The Netherlands, it’s the heart of the city of Amsterdam, and there’s always something going on there, it’s the favourite place for demonstrators and street artist’s choice theatre. Bands play during the summer months, concerts are held there, Christians do street theatre, fairs are held, beach soccer tournaments take place, soccer matches for the homeless, the yearly Dam run sets off from there, and during the winter months, an ice skating rink is set up and a Christmas tree and menorah lit.

Dam Square lies right smack in the centre of town; it is the centre of town; all street numbers start from there. It is also the nations main outdoor ceremonial centre. Opposite the palace and in front of the Hotel Krasnapolsky, one of the nation’s most famous landmarks stands the National Monument. See the picture on the right. When foreign dignitaries visit the country, they usually take the time to lay a wreath there accompanied by the Queen.
On memorial day, the 4th of May, it is the place where the main ceremony is held to remember those fallen during the second world war. The event is usually broadcasted life to the nation on several tv stations. The Dutch are not particularly patriotic, but on that day, at 8’o clock, we all shut up for two minutes and remember those who are no longer with us. Why was this place chosen? Because this is where the last Dutchmen, during WW2, made the ultimate sacrifice and gave their lives. The Netherlands was liberated on May the 5th, 1945, when the German admiral von Friendeburg, responsible for all German forces in the Netherlands, capitulated. It would, however, take another several days for allied troops to reach Amsterdam as the war in Germany went on a few days longer. Frustrated German soldiers opened fire on the celebrating crowd gathered on Dam Square upon hearing great news. The crowds were ecstatic; the German soldiers, with no one to surrender to or arrest them, were not.

On another less serious note …
We already mentioned the yearly Dam run-in in paragraph one. This is an annual event in which thousands take part in running from one Dam to another. You may have noticed that the names of many towns in Holland end with the syllable “dam.” Dams wesignificantant to the ancient Dutch; the town we run to is called Zaandam. It’s held every 3rd Sunday of September, and it’s a 10 English mile run or 16,1 km.
Hotel Krasnapolsky is a five-star hotel whose reputation stretches far beyond our nation’s borders. The Square also plays host to the industriële club (entrepreneurs), the Bijenkorf, Madame Tussauds, and the Nieuwe kerk.

There are two shopping streets on opposite sides of Dam square running parallel to the Damrak and Rokin. To wit the Nieuwendijk and the Kalverstraat. It’s a woman’s heaven, one boutique after another with an occasional department store and McDonald’s in between. If you come from central station walk down Damrak and take the second alley to the left, after 50 meters you’ll come upon the Nieuwendijk, if you walk it down you’ll come to Dam Square, cross it, continue walking in the same direction as you were and on the other side of the square starts the Kalverstraat. In the end, you’ll come across the munt tower and the old city gate. If you continue in the same direction, crossing the road, you’ll enter the Reguliersbreestraat, which will take you to Rembrandt square. If the weather allows it, have a seat at one of the many terraces there and enjoy a drink and any entertainment offered by the many street artists present.

History
Many people will have us believe that Dam square was where Amsterdam originated. Unfortunately for them, that’s not true. The Dam was built to form a connection between the two opposite sections of the city; in the middle was a lock that ships could pass through. The date 1275 is often mentioned as that’s when the city obtained city rights.
In those days, it wasn’t called De Dam; the western part was called Die Please, or De plants; here, the English word “place” would render a rather accurate translation. And the Eastern part Vissersdam as this was where the fish market was located. This square, however, was a lot smaller than what we have nowadays. In 1395 the old town hall was built there; in 1655, it was replaced by what is now the royal palace, and from 1410, the new church was erected, the square was also a marketplace.
The place obtained its current size during the sixteenth century when houses were torn down to create more space.

Yippie, he’s a hippy.
Quite a few of you will remember Dam square as the place wherein all the shit with the hippies went down in the seventies. At the end of the sixties, Amsterdam had become a centre for anarchism, and the city was hip. Hippies came from all corners of the world to visit this “far out” city, and if you had no money, that was no problem. You slept on the cobblestones of Dam square around the monument, you panhandled to get some money for tobacco and hashish, and you ate for free at the Hari Krishna’s. In the summer of 1970, more hippies were sleeping on Dam square than rich people slept in hotel Krasnapolsky, the powers that were prohibited the practice.
The unhappy hippies shook off their lethargy and “Peace man” pacifism and threw rocks at the police. Amsterdam’s bored, disgruntled youth soon came to their aid, and the city erupted in the worst riots it had ever seen. I know because I was there. Arrested and molested. Eventually, the marines got involved in restoring order. The sleeping out moved to the Vondelpark, way more comfortable than the cobblestones of De Dam, but in the end, sleeping there became no longer allowed as well. 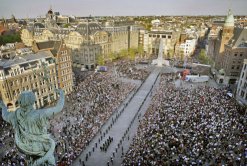 The palace used to be the town hall.
Many autonomous people of Amsterdam still think the building should once more become the town hall instead of the palace that Napoleon’s brother turned it into in 1808. Napoleon made his brother Louis or Lodewijk King of Holland in 1806. Two years later, he took up residence on Dam Square, and his wife hated it in Amsterdam; Louis became too “Dutch” for his Imperial brother in that he actually started caring for the people of this nation and had him abdicate in 1810 upon the which we all became French. The building had, in the meantime, become a national property and was once more adopted as a Palace by the present royal family. The building is usually open to the public, and occasionally there are exhibitions on display.

Actually, the palace is way too small to house the municipal government nowadays. Discussion closed.

Dam Square is window number 1 on the Canon of Amsterdam.