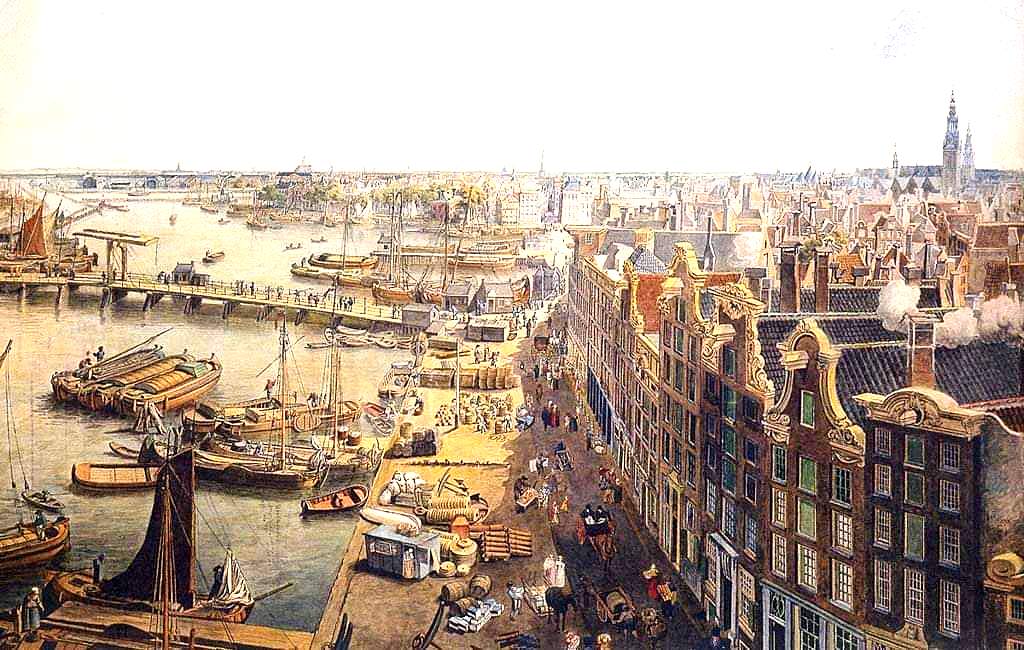 It seems the creators of the Canon of Amsterdam had great difficulty in finding suitable historical events to make up the “sacred” number of fifty. One of these dubious subjects to me is number 4 of the Canon, the great fire of 1421.

We all know what a city-wide fire is. The great fire of London, for instance, comes to mind. Although in our day’s city fires are rare and most of us have never seen or been in one, there was a time in which they were quite common, a huge fire that destroys many houses, buildings and property. These days cities are better prepared and organized; fire services are far more advanced than they were in the middle ages, houses are build out of stone instead of wood. Wood was the norm in those days.

This, in reality, sums up and describes how a small fire could so easily end up engulfing an entire city and turning it into an all destructive towering inferno.

Amsterdam and London were not the only cities that had to deal with this kind of fires during the middle ages; they were common; the fire of Marlborough, for instance, comes to mind 1653, Rome in 64 AD, Constantinople was burned down 4 times or more, three times by the Crusaders, 675 the great Fire of Northampton, New York, 1776, the great New Orleans Fire 1788, and we can go on and on. With city fires being such a common thing during the middle ages and after, it’s hard to see why the city fire of Amsterdam would be such a special event, but the Canon mentions it, and that’s what we’re dealing with here.
The city of Utrecht had already been on fire 4 times by the time it reached the 12th century, and they were not little fires either but back to Amsterdam. The city was hit by fire in 1421 and, sad to say, once more in 1452.

The latter fire was much bigger than the former so why the Canon choose to discuss 1421 is beyond me.

In those days, as we mentioned before, most houses were built out of wood. But we haven’t talked about roofs yet. Roofs consisted out of reeds or thatch supported by wooden rafters. People burnt almost anything in what we today call (very trendy, very “green”) multi burners. But open wood fires were the real norm, usually placed in the middle of the room. Chimneys were invented in Northern Europe during the 11th or 12th century, but they were expensive and difficult to maintain. Electricity, of course, did not exist, and candles were used to provide light during darkness.
As houses were built nearby of each other, a little fire could easily, once it lit up, spread to adjacent buildings and consume and set entire streets ablaze in no time. If the fire was hot enough and burning pieces of roofing were taken up by the wind, a small fire could easily turn into a disaster and burn half or more of a town down. In 1421, 35% of Amsterdam went up in flames, but that was nothing compared to what would happen thirty years later.

The second fire, 30 years after the first one, burned down three-quarters of the city. This fire was far more important than the first one in that afterwards; the city administrators took two important decisions. House owners were required to place a brick wall between their house and their neighbours, and thatched or roofs made out of reeds were prohibited. The result of this was that eventually,, the common wooden houses slowly disappeared from view and were replaced by structures made of brick instead. The wooden facades and walls were incapable of supporting the new heavy slaty or baked clay roof tiles that now had to be used.

Only two houses made out of wood have survived to this day, it’s the one standing at the beginning of the Zeedijk, it’s a pub called Het Aepje. And there’s another one on Het Begijnhof, but both were built much later, about 70 years after the last fire. Amsterdam is built on vertical poles, how, ver, it did not start until the houses became too heavy to be supported any longer by horizontal beams placed underneath the houses. It became necessary to look for a sturdier foundation. The. Thetion the city came up with consists of rag large poles into the ground by dropping a heavy piece of rock or metal on top of the pole while in a horizontal position. It’s a noisy procedure, but until today, no alternative has been found. Hence, we suffer silently whenever it becomes necessary to tear one structure down to replace it with another, a favourite pastime of Amsterdam city officials and their contractors.
The palace on dam Square is a perfect example of this. It was built between 1648 and 1665 and is supported by 13.659 vertical poles.

The big disadvantage of wood is that it starts to rot when it’s no longer submerged in water. It’s possible that during the construction of the North-South underground line, several poles may become exposed to oxygen as water is being pumped away while digging the tunnels is in progress.

Amsterdam, centuries ago, had the privilege of experiencing a wonder called het Miracle of Amsterdam; it’s about a host that ends up at the Old Church.

The Old Church was miraculously saved during the fire of 1452, the same had happened in 1421, but the fire was less severe then. While three-quarters of the city was wiped out, the host in the Old church was once more not affected.