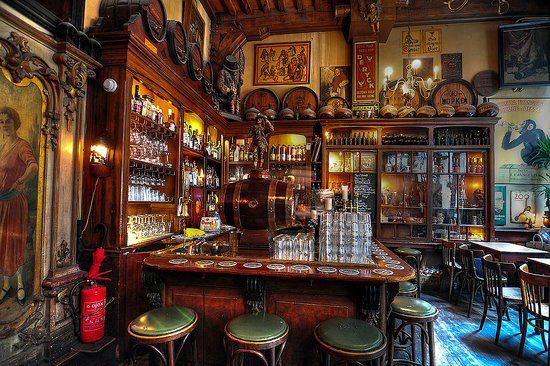 Het Aepjen is one of Amsterdam’s most interesting pubs, for one because it’s one of the oldest ones in the city and secondly. After all, it’s one of the oldest locations in Amsterdam. It’s on the corner of the Zeedijk, near Central Station. Zeedijk means “sea dike” in Dutch; it’s, therefore, fair to assume that once it kept the sea out of the then fragile town. Around the corner of the pub, the street is called Sint Olofpoort (saint Olof’s gate), a reference to the city gate that once stood there. It reminds us of the area’s actual age. Zeedijk AmsterdamThe zeedijk is a street with a rich history and not all ancient either; not too long ago, it was the virtual home of about 200 junkies and 50 dealers, a street you wouldn’t venture into unless necessary. And that wasn’t just for ordinary folk either; that went for the Amsterdam police force as well. If they did have to enter the road, they would do so in force, with horses and shields and truncheons. Their intrusions would not remain unnoticed either; they would be reported in every newspaper and on the evening news. Thankfully, those days are over; the Zeedijk is once more a regular street in Amsterdam and saves to walk down and relax. The Zeedijk ends at the Nieuwmarkt, one of Amsterdam’s three entertainment squares.

The street is also the centre of Amsterdam’s Chinatown. If you’re looking for some chow mein, the Zeedijk is the place to go to. Besides het Aepjen the street has many other pubs; another one worth mentioning is “De Ooievaar” (the stork). It’s almost opposite her, Aepjen, and this place might actually be the oldest pub in Amsterdam. Then again, maybe not. Both het Aepjen and de Ooievaar are pubs checking out if you like a few drinks now and then.

Het Aepjen is a wooden structure

The city was pretty much destroyed by fire in 1452; its administrators decided upon this disaster that it would be prudent to build our structures in the future with a less fire-sensitive substance like a brick. As a result, almost everything builds out of timber has disappeared; only two wooden premises are left. One of them is het Aepjen.

In ‘t AepjenThe pub used to have another two floors above ground level, the wooden stairway bears witness to that, but nowadays, it leads nowhere. An adjacent hotel uses the two floors.

Amsterdam was a port city and still is, but it used to be a far more important one; the town was always filled with sailors waiting for their ships to load, unload, be repaired and set sail again. They ate, slept and drank at Inns near the shoreline. Het Aepjen was one of them.

It regularly occurred that if their ships remained docked too long, they ran out of money, could no longer afford to pay their bills at the said Inns and got into debt.

Of course, bills had to be paid, and one way to do that was to promise the landlord they would bring back with them on their next journey from some exotic place a native animal, usually a monkey. That’s how het Aepjen got its name; it’s old Dutch for Aapje, meaning small monkey. Primates were popular; many a pub had a few cages with monkeys to entertain the customers in those days. One drawback was that they usually had fleas.

So the monkeys eventually had to go; the customers got tired of scratching and demanded to flee free premises. A man owned a large garden, and he was happy to take the animals in. That garden is now called Artis, the zoo. It’s a lot bigger, of course, these days, but that’s how the Amsterdam zoo started. (link to the zoo page).

Meanwhile, the pub is still called by its original name; it survived several city-wide fires and became somewhat of a place of pilgrimage; it can indeed be quite busy and taps an excellent ale called Palm.